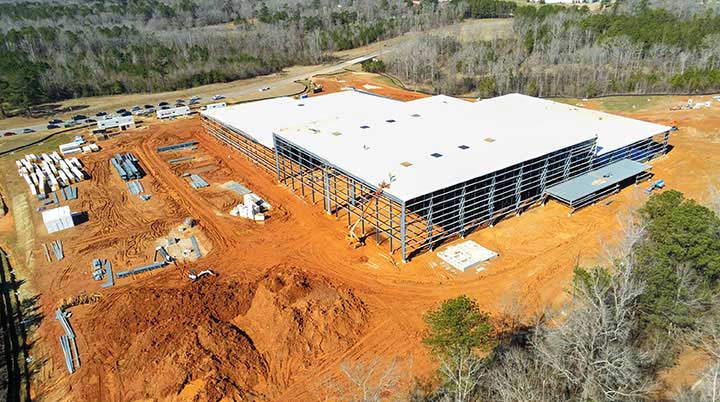 Adel, GA: As the world continues to focus on the challenges of an economy-crunching pandemic, a breath of fresh air came recently when Vulcan Steel Structures, Inc. (Vulcan Steel) of Adel, Georgia, announced that Shinhwa U.S. Auto Corp., a subsidiary of South Korea-based Shinhwa Group, has increased its order of structural steel for an automotive parts manufacturing facility now under construction in Auburn, Georgia. Vulcan Steel recently received the contract to fabricate steel to support an expansion of the building project, from 219,000 to nearly 265,000 square feet.

Construction of phase 1 began in 2019. A video of recent construction activity is available at https://www.youtube.com/watch?v=x2x11uNqamw.

“Our Vulcan Steel team is encouraged by this news,” says the firm’s president, Steve Browning. The company employs over 125 manufacturing and engineering staff at its 289,163 square-foot manufacturing facility in Adel. “We are excited about the future and thankful for sharing this positive message in a time of great turmoil in our nation and our world.”

As announced in a press release from Governor Kay Ivey last October, Shinhwa will initially produce drive shafts for vehicles made by Hyundai Motor Manufacturing Alabama in Montgomery and Kia Motor Manufacturing Georgia. Shinhwa ultimately intends to expand its production in Auburn and provide parts for other car manufacturers.

“We will start our U.S. project by introducing a highly automated machining process to be followed in the near future with our die casting lines,” said Duk Keun Oh, president of Shinhwa U.S. Auto Corp. “We are grateful for our collaboration with Seohan in Auburn and see great opportunities for our growth in North America.”

About Shinhwa Group: Shinhwa was founded in Changwon, South Korea, in 1995, and the Auburn operation will be its first manufacturing location in the U.S. The company has begun construction of its new facility in the Auburn Technology Park West, and phase 1 of the project is expected to be completed in summer 2020.

This function has been disabled for Vulcan Steel Structures.